IDEA Nepal is a nonprofit, non-Governmental, social organization established in 2018. It is based in the west part of Karnali province capital Surkhet in Nepal and run by young, enthusiastic, dynamic, dedicated youth for transformational  societal change. It enhances the leadership of young girls and boys, and encourages them to fight against injustice and inequality in society.

IDEA Nepal is a transformed body from the core of the Sambad center (Dialogue center), a designed program for empowering adolescents, funded by the Stromme Foundation in 2013. Ms. Rachana Sunar was the facilitator of Sambad center in 2013. Together with young girls, Sunar was able to stop more than 40 child marriages by spreading awareness against child marriage and its consequences. Sambad was a yearlong program that made a great impression. There was two house daily conversations about social issues with young girls in the community which aimed to teach them spread awareness and tackle these issues.

Later the Sambad center continued to grow stronger, It championed fighting against child marriage, violence against women and girls, sexual harassment and abuse,  caste discrimination, chaupadi and vulnerability. It taught girls and women their rights and human rights, as well as the importance of education. It encouraged young mothers to learn income generating activities and to run small start-ups so they could earn money and equal respect in the family.

The Sambad center gained knowledge in coordinating with local government and stake holders, for teamwork and partnership, and eventually developed in to a NGO. IDEA Nepal stands for Investment for the Development, Empowerment and Awareness. It has a mission for ensuring human rights to end injustice, inequality for everyone. 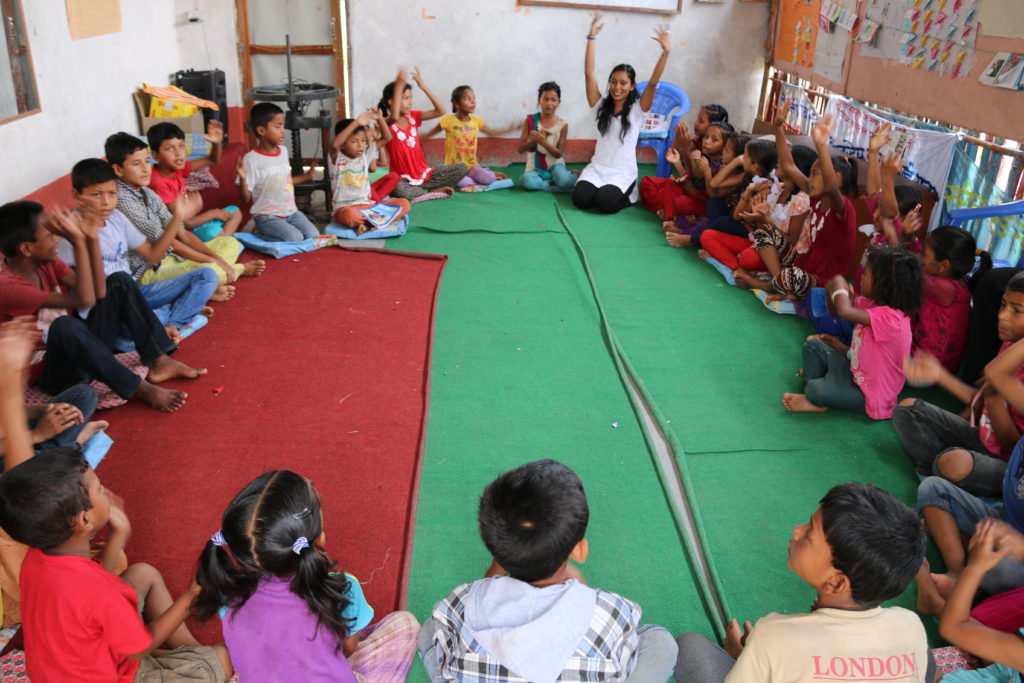 Baalbagaich Gayankunj is a Saturday school for children where they learn through play and teamwork. It is a free space where they learn, enjoy friendship, show their talents and study about child rights, gender equality. They also learn the importance of good habits, manners , respect, gratitude, teamwork and honesty.

IDEA Nepal is running a Balan skikshya kindergarten/Montessori for children whose mothers were forced to marriage as child bride. Both the young mothers and children suffer from domestic violence, poverty, or physical disability. The center offers free and low cost day-care and which lets the young mothers to go back to school and run small start-up home businesses to earn enough to live independently. IDEA see’s the potential of investing in education and empowering young mothers and young girls in order to stop child marriage and give girls freedom. This kindergarten will grade up each year and run until high school to let young girls to be educated, empowered, and independent.

The goal of running this school is to enhance the access of education to every needy child. Currently, children are chosen by the board of the school and student selection committee.

We open admission and collect documents, fill out the forms, we interview, we visit door to door. The board of the school and student selection committee decides who are the most needy kids to get free education.

The Freedom peace women center is for young marginalized women who had been forced to child marriage. These are women who are suffering from domestic violence, sexual harassment and injustice, and who are living under extreme poverty. On Friday classes run to educate these women to raise their voices, to start IGA and to learn about women’s rights. IDEA empower women to develop their teamwork and leadership skills. IDEA helps them to stay healthy, on their own feed and have good self-esteem.

Why we are raising children?

These children have poor backgrounds of domestic violence, parents with physical disabilities, single parents or are orphans. They lived in a violent environment and are left behind at school. Therefore IDEA cares and works for them. They seek sponsorship for the kids and maintenance of the admin and school. Currently 5 of the teachers are graduate girls from Sambad in 2014 who are dynamic and passionate for social work.

Rachana Sunar the founder of IDEA NEPAL, is an enthusiastic, dedicated social activist defending human rights in Nepal. When Sunar was 15, she was forced into marriage, but she tricked her family and stopped her own child marriage. Since then she has actively led the campaign “Girls are Girls not Brides” to stop child marriage. She started her journey for social justice in 2013, and she has stopped more than 80 child marriages. Around 10,000 students have been trained by her to stop child marriage.